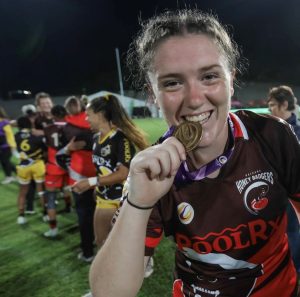 Well done to Hannah Wilson who recently played Rugby in Cape Town. Hannah was selected to play for an international rugby team, which was made up of 8 different countries…. Australia, England, France, New Zealand, Ireland, Sweden, Holland, and Kenya. Hannah was the youngest member of any of the 10 teams competing. These teams were made up of  Pro senior players. The team was unbeaten over 2 tournaments winning all 10 games. They also won 3 trophies & 3 medals and won the overall franchise award.

If you do not have a login, please sign up HERE

Back to login
We use cookies to ensure that we give you the best experience on our website. If you continue to use this site we will assume that you are happy with it.OkRead more